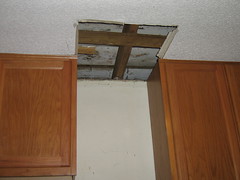 So, yesterday we did our farmer's market thing, then came home and unloaded and loaded up some stuff in the cars, and Jeff and his mom drove off to the new house, with me trailing. I went and picked up my mom, and took her over to the house (which she didn't know about yet.) (I also timed the drive: 5 minutes, the way I drive.) She was surprised and pleased (and sleepy, I think I caught her pre-nap.) Dad came over and looked at the inside of the house for awhile with Jeff, home repair geeking out. Eventually, mom dad and Val and went home. We walked around and started making a list of things needed for the round of repairs that needs to happen before we move in.

We drove into Burlington for lunch and Home Depot. When we got back, we started in the kitchen, because I was not feeling patient enough for wiring. The first thing that needed to happen in there was moving a very large, very awkwardly placed base cabinet. It chopped up the wall that the fridge and stove will go on, making the fridge space too narrow for the one we want. It was floor to ceiling, making the top half pretty unusable for me. There was an outlet behind it, that the former occupants had accessed by cutting a hole in the backing of the cabinet. And so forth.

We thought this was going to be pretty easy - unscrew it from the wall, pull it out. Well, it turns out that the cabinet was taller than the ceiling. Instead of getting a cabinet to fit the space, they'd gotten whatever they wanted - probably whatever was cheap - and then sheetrocked AROUND the cabinet, so that it was stuck in the ceiling. 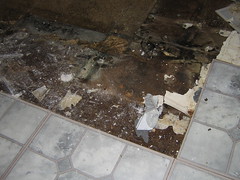 Long story short, the cabinet eventually came apart, not out. At that point, we discovered that during the house's history, people had put down a layer of linoleum over another layer of linoleum over some fiberboard over 2 more layers of linoleum ... over wood floors. It looks like we have wood floors in our kitchen, which you can kind of see in this picture. We are terribly pleased, and cleaning that up is on today's list.
Collapse