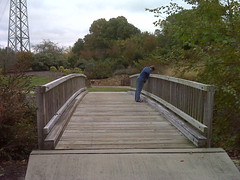 Friday, I spent most of the day wrestling with [Large Financial Institution], in between teaching a couple of classes. In the afternoon, Jeff and I faxed some stuff off, then went for a long walk over in the Arboretum. We came home and made tacos for dinner and watched the pilot of Castle (verdict: much better than expect, Nathan Fillion was the total right choice to play Rick Castle [though it's odd, seeing him as anyone but Mal], will continue to watch) and goofed off online and crashed out with books.

Yesterday morning we had a lazy morning, then went out to my parents' house by way of Earthfare. There were more tacos for lunch and playing Careers and Uno and giving my dad his birthday present (today is his 60th birthday, happy birthday daddy!) We wandered back home, Jeff watched TWIG, we headed out to Taco Bell for dinner (yes, our capacity for tacos is pretty limitless, and they were doing free Black Jack tacos, since it was Halloween). The parade of costumed teenagers into the Taco Bell was entertaining, and they turned out to be terribly well behaved. We saw

Then, we headed downtown to see Oleanna with some friends of ours. (More information about the play over here.) It was... hard to watch, in some respects. It's easy to forget as an eductor that, no matter how much you like your students (and how much they seem to like you), that as long as you have power over them (and you do, no matter how fair and even handed you work at being), that there's an inequality there, an inequality that can go disastrously wrong. It's a play about power, it's a play about what people do when they feel backed up against a wall (much like The Life of David Gale), about communication issues, about sex and patriarchy and people who just don't consider how they come off, about a flawed educational system and tenure system (though much of the audience wasn't going to get into that). It's 75 minutes long, no intermission, and I felt like I was holding my breath the whole time.

Even better, Triad Stage does $10 general admission tickets (advertised nowhere on their website that I could find, I don't know how Amy found out about them) that were right on top of the stage. They were better seats than many of the more expensive seats in the house. We'll be headed back to see more productions (I want to go see Around the World in 80 Days in the spring).

Afterwards, we wanted a drink and Amy needed food. The first place we tried told us that their kitchen was closed and that the only place that might still have an open kitchen might be McCoul's, but that if we were going to head over there, we'd want to do it Right Then, because A&T's homecoming was going to let out and downtown was going to be a zoo. We said "Oh, crap, thanks for the reminder", and scooted out of downtown down to a pizza place down by campus that also has a full bar (which I didn't know, very cool). We had cheese fries and a drink and sat around and watched the rain and costumes and chatted for awhile, and then it was time to come home and sleep. Which we did, like well behaved logs.

Today is an extended family party, partially in celebration of Dad's birthday, and then this evening, I might actually have to do some work.

It's been a fabulous weekend, and just what we needed.
Collapse